Cheesemaking in a nutshell

The making of the original Emmentaler AOP can be traced back centuries. In earlier times, Emmentaler was produced only in summer, in small quantities on alpine meadows. When the first cheese dairies opened down in the valley around 1815, the Emmentaler’s area of origin expanded to include the whole of the Swiss plateau or Mittelland.

Even today, Emmentaler AOP is made in the traditional artisanal way by our passionate cheesemakers at around 110 cheese dairies, and of course always in accordance with the same original Emmentaler AOP recipe that was used long ago. Apart from some new influences brought by mechanisation (for example the use of modern machinery that makes the cheesemakers’ work a little easier) and some improvements in the processing technology, the manner of production has hardly changed at all in the last 100 years. 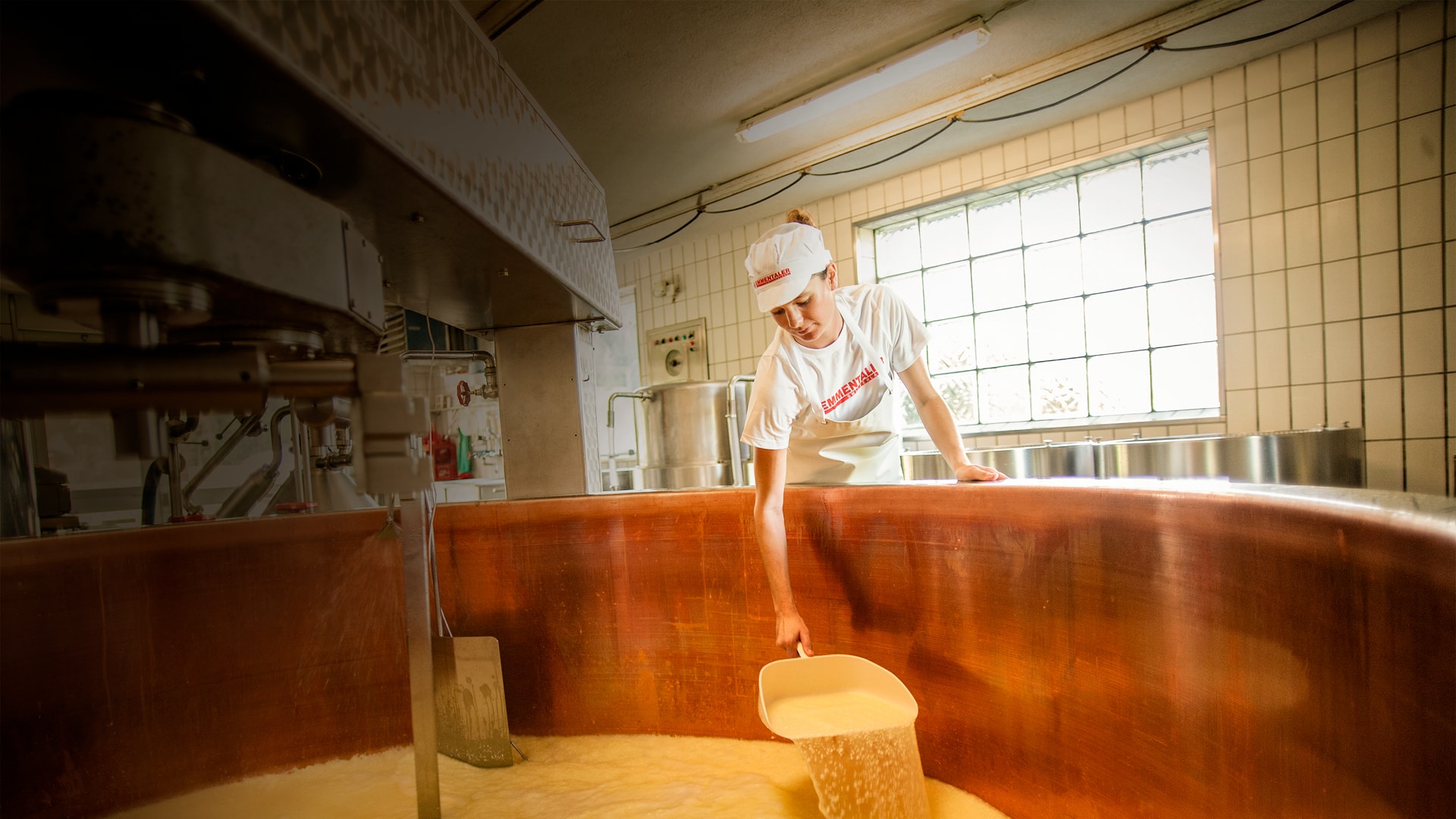 It’s no secret that cheese is made from milk. But how exactly does the process used to make Emmentaler AOP work? And what do you need apart from milk?

What ingredients go into Emmentaler AOP?

An Emmentaler AOP is made exclusively from:

So what exactly are the steps in this sustainable cheesemaking process?

Step 1: it all begins with the raw milk

About 200,000 to 220,000 t of milk from cows not fed on silage goes into the production of Emmentaler AOP every year. The raw milk comes from cows fed on grass and hay that have plenty of space to roam. Additives? Not a one. This quality product is produced, processed and refined right at the place of origin. The Swiss milk is top quality, and we know that the only way to make a wheel of perfect Emmentaler AOP is to use the very best, flawless milk.

Step 2: transportation of the milk

The farmer brings the fresh, untreated raw milk to the cheese dairy once or twice a day, or it is collected from the farm. The short transportation distances – 20 km maximum – guarantee freshness. Plus, this helps protect nature, the climate and the environment.

Since the raw milk (from cows not fed on silage) sets the foundation of a high quality cheese, the quality of the milk in large part determines the quality of Emmentaler AOP. For this reason, the milk is continuously monitored, and the experienced cheesemakers must process the fresh raw milk within 24 hours.

We can therefore say with confidence: Emmentaler AOP contains the most stringently controlled milk in the world. 99.93% of samples are found to be faultless. That makes this cheese a world-leading cheese!

Step 4: warming of the milk, bacteria and proof-of-origin cultures

The production process begins with warming the milk in the copper kettle to about 32°C while stirring constantly. During warming, selected bacterial cultures are added to the milk, along with the proof-of-origin culture. The bacteria trigger the fermentation and maturing of the cheese. The proof-of-origin culture acts as proof that a cheese is a genuine Emmentaler AOP. It can only be used by the cheesemakers who make original Emmentaler AOP, so it is protected against counterfeiting. The bacterial cultures used to make Emmentaler AOP are provided by Liebefeld Kulturen AG.

Step 5: addition of rennet and curdling of the milk

Next, the rennet is added, and the stirrers are taken off and replaced with cutters (harps). Rennet is an enzyme that causes the milk to curdle and become a semi-solid mass (known as curd). In other words, this step is essential in order for the solid curds to separate from the liquid whey. After the addition of the rennet, the milk needs to rest for a while. Then, around 40 minutes later, the milk will be curdled and will look like a thick yoghurt.

The curd is now cut into little cubes using the cheese harp. There is now a mixture of curd grains and liquid whey. Within a period of six to ten minutes, a curd grain size of four to six millimetres is achieved. The cutting process begins at a very slow speed. As the curd grains get smaller, it is speeded up so that the grains are cut up sufficiently.

Step 7: warming of the curds

Step 8: pouring into the cheese mould

The cheese mould is what gives Emmentaler AOP its characteristic shape and size. One wheel weighs 90 kg on average and has a diameter of 80 to 100 cm and the thickness of 16 to 27 cm. 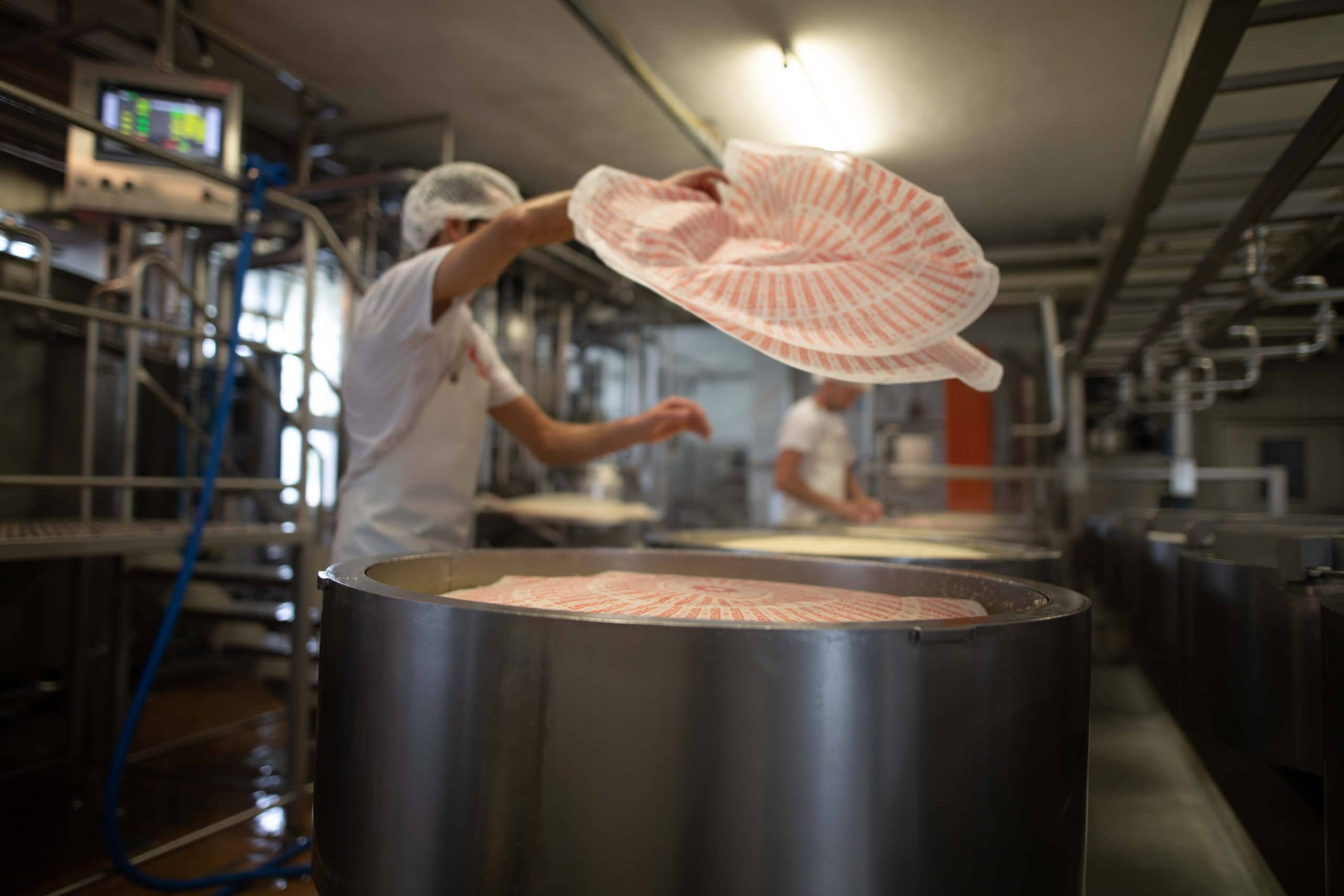 Once the cheese dairy’s mark has been applied, the cheese mould is covered. The fresh cheese is pressed for 20 hours with a load of up to 2,000 kg and is turned up to five times a day to achieve the ideal water distribution within the cheese. During this time, lactic acid bacteria ferment the lactose (the sugar found in milk) into lactic acid. This is what makes Emmentaler AOP naturally lactose-free.

Step 11: the cheese wheel goes into the salt (brine) bath

The still young cheese wheel now spends two days in a salt (brine) bath. This removes some more water and sets the curds. It also causes a rind to form on the surface of the cheese, and as the cheese matures, its flavour is enhanced by the uptake of salt.
The salt content of Emmentaler AOP is between 0.3 and 0.5%. This is a very low salt content compared to other hard cheeses.

After the salt bath, the wheels of cheese are left to mature naturally for at least 120 days – initially in the fermenting cellar and later in the storage cellar. The fermentation cellar’s temperature of about 19-24°C triggers propionic acid fermentation in the cheese. This causes carbon dioxide gas to form, which is unable to escape. Because of this, the Emmentaler AOP cheese develops its characteristic, world-famous holes.

After six to eight weeks – as soon as the holes are the correct size – the cheese wheels are put in the storage cellar, where the temperature is about 12°C. This halts the formation of holes and allows the cheese to mature further.

The original cheese comes in eight levels of maturity, each with its own type of maturity and maturing time. Every Emmentaler AOP develops its own unique aroma, which can range from nutty and mild to strong and tangy. Emmentaler AOP is sold as mild when it is at least four months old, as mature from eight months and as extra-mature after a maturing period of 12 months.

The quality of the cheese wheels is closely monitored with regular checks throughout the entire maturing and storage period. A wheel of Emmentaler AOP has a maturing period of up to 24 months, or sometimes even 30 months, which is a sign of the high milk quality and processing quality of this cheese. As the cheese gets older, the rind becomes darker and acquires a patina. The special microflora in a cave or rock cellar where the cheese is kept may even cause the rind to become almost black during maturing.

After four months of maturing and continuous quality checks, the wheel of Emmentaler AOP is assessed by our experts. In order to be approved for sale, the wheel must achieve a score of at least 18 out of 20 points. Only class 1 Emmentaler AOP (scoring at least 18 points) is permitted to be sold. To achieve this, the cheese must have impeccable curds, flavour, holes, external appearance and shelf life. These strict quality standards are set out in the Emmentaler Switzerland functional specification document. 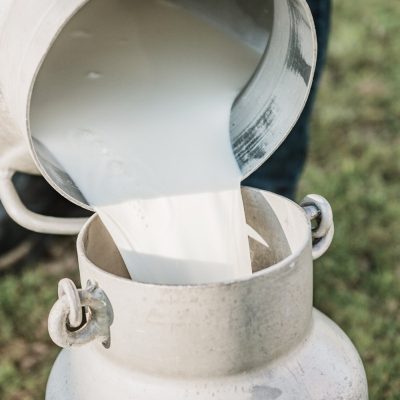 Some key questions and answers

Cows give us more than just milk 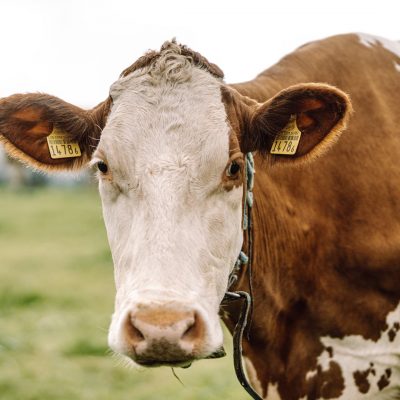